There is no victory without Tory~! Just some guy named Vic.... (thanks to Andrew for this one)

Torhee is about average height for an elf, with pale listless hair, blue-green eyes and a rebellious and haughty attitude that the world has done it’s level best to beat out of him. His specialties include finding and disarming traps and locks, sneaking, and shooting people and monsters from far far away. He does not like close combat and oh yeah… he’s the party’s poki-dex, with lots of useful information about monsters.

He carries a custom masterwork heavy crossbow that does extra damage and has extra range. He also has a light repeating crossbow he picked up from some slavers from the underground, along with 12 poison quarrels (he’s saving those for a special occasion). He also has a large elf-make knife that is armor piercing that he can use if he finds himself in a pinch. His armor consists of custom basic leather and custom chain torso coverage. He also has a gold dragon ring he stole from a dwarven keep that he wears on a length of leather around his neck and under his armor.

His patron god is Silamos, God of Shadows and Misdirection, and like most Silamosans has a love/hate relationship with his deity. He is fairly devout however and will try not to do anything too displeasing to Silamos. He is a mid-level member of the Traveler’s guild and has worked out a solid working relationship with the human warrior Belstaag Bob and the boggie Pansey.

Torrey doesn’t really remember much about his early childhood. There are occassional flashes of green and light and other pleasant things, but they are rare and usually only when he sleeps. For as long as he can really remember he has lived on the edges. He became good at getting into places he wasn’t supposed to at a very early age and found it a useful skill to avoid getting killed. He’s not really a criminal at heart but having never had enough growing up he is obsessed with making sure he’s well taken care of… not that he’s very good with money anyway. He still manages to find it easier to live on the move than settle down. Working with Tempest, Pansy, Rothchilde and others Torrey is finally starting to feel some sense of security and even, possibly family… although he’ll never admit it to them. 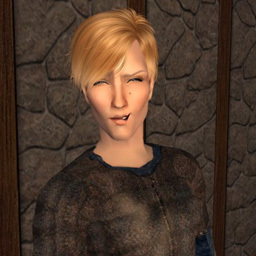