FOR THE FORESEEABLE FUTURE KIRA IS AWAY FROM THE FREEHOLDS

Occupation: Follows adventurers into scary places and enjoys the meyhem that ensues

God: Khorus
She wears the robes of a priest of Khorus over her armor. She has removed the sleves and cut slits mid way up her calfs to allow her to fight freely.

Kira wears a necklace of trophys from past foes of worth.
currently on necklace: mecharm gear, deathwolf canine tooth

Iskierka is a 32 year old elf. She has spent the past two years in isolated worship to Khorus, god of true power. She stands 5’4”, missing the tip of her left ear and her tongue; one from a lifetime of fighting and the other a mark of slavery. Iskierka can understand Butchok well (for an Elf) and can stumble through a conversation in Filias or Dracoris. Although born in Coriala Forest Iskierka spent most of her life in the mountains East of the Freeholds as a slave to the Chaindancer Brute clan. A hard life has left her mentally unstable and she has a tendency to berserk if provoked.

At the age of 10 Iskierka was taken from an Elf caravan during a Brute raid. She spent the next twenty years in slavery to the Chaindancer Brute clan with one purpose, fighting in arena matches that were held between Brute tribes in which slaves and occasionally a drunken Brute were pitted in matches to the death for coin and bragging rights. Through this she became efficient in the Brute combat method of Smashing Strike. Her second owner hored her out for coin feeling his earning from her arena fights werent enough.

On the night of her 30th birthday Khorus came to her in a dream instructing Iskierka to kill her Brute master Hemdetch, taking back power over her own life. With Hemdetch’s blood on her hands (literally) Iskierka escaped the Brute camp that same night and fled deep in the mountains.

Through Khorus Iskierka has become “wild”; seeking revenge against any Brute, with a special hatred toward the Chaindancer tribe. She also harbors a vicious intolerance toward slavery.

Iskierka defends herself with the brutal Brute fighting style Smashing Strike and a pair of spiked brass knuckles given to her by her first Brute master, a sign of respect among slaves for her prowess in the arena. Ironically it was these same spiked knuckles that penetrated the skull of her second owner on the night of her 30th birthday.

Adventuring outside of the Eastern Mountains for the first time in her life, Kira is overjoyed to finally be able to exert her own will in the name of Khorus. Quickly tasting the joy of fighting for ones self Kira falls deeper and deeper into the power offered by Khorus until she findes herself unable to live without him. She willingly throws hershelf into devout servitude, offering all her worldly wealth to the temple. Months later she emerged full of power and ready to spread Khours’ dominance. 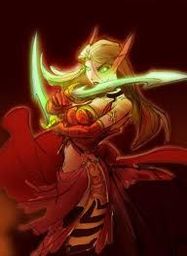