Diplomat of Steel and Violence

Tempest wears partial Master Craft Plate armor over leather and uses a large craftsmanship shield. He has now obtained a Master craft armor piercing A.S.H or Axe, Spike, Hammer all in one weapon, or (Urgrosh style weapon) for those of you familiar with D&D. He also carries an Armor Piercing Battle Axe taken after clearing Skybane Forge as a back up.

He was awarded a number of things from taking 2nd place in a Belstaag Tower tournament and wears them proudly: boots, cape, sash and master craft parrying dagger.

He shaves his head, or at least keeps it extremely short and has coal black eyes. He is only 27 years old but has the look of a Gunnery Sergeant and has already seen his share of death and horror.

Tempest has proven himself as a tactical and careful leader to date. He has successfully lead adventurers that were not only successful but profitable and many times surpassed the expectations of the guilds and local community leaders

He is also proud of the fact that no character while in a group under his command has lost life or limb. However, Tempest also realizes that this is not just due to his “Command” skill. It is also due to the skill and ability that each adventurer has brought into the deep dark recesses of the world that few dare to tread. It is only thru everyone contributing that all have gained riches, reputation and glory.

Tempest spent most of his youth learning how to defend himself from his 6 older brothers. His father was a merchant, and although Tempest saw this as an honorable profession and cared for his father a great deal, it was just too boring for Tempest’s taste. When his big brothers were not beating on him and he wasn’t finding a fight elsewhere he would avoid his chores and play war pretending to be a fighter like his favorite Uncle Baltazaar. He saw his Uncle Baltazaar as a true mans man, a well known hard drinking tough guy fighter.

Tempest and his Uncle had a special relationship from the time Tempest could begin to walk and talk. However, Tempest could not pronounce Baltazaar’s name and Baltazaar thought this was hilarious and just called himself Uncle Bob.

For many years growing up Tempest begged Baltazaar to teach him how to fight using a sword, shield and armor. Finally when he was old enough and against his father’s wishes, Baltazaar did teach him everything he knew about being a good fighter. However, Tempest was so focused on becoming an ultimate fighter like his uncle that he didn’t take the time to learn much in the way of social skills or develop his intelligence.

And so Tempest practiced his skill until he entered the Belstaag Tower tournament and took 2nd place. Some of his friends made fun of him because he was beat out of first place by a girl. However, Tempest knows and will be happy to point out that this is not just any girl; this is a raving, whirlwind, killing machine that happens to be in the form of a woman. Otherwise known as Rook.

Shortly after the tournament the Security Guild took an interest in Tempest and sent him, as their representative on a number of missions. It just so happens that Rook has also been attached to this group of problem solvers and they have proven their worth time and time again.

He has found camaraderie and allies in this small group of problem solvers and most of the time they have accepted his leadership when it comes to tactics and battle. Each of them has found their niche and they work well together.

As time has passed Tempest has gone from a low brow, uneducated, savage fighter to a team leader. He now understands and sees the importance of using more than just brute force and is learning and applying group tactics. He is also coming to understand that although fighting tactics and brute force have their place, political tactics and social abilities are also very important.

As Tempest has grown up he has also found religion. He worships Sim and now sees that part of his adventuring is as much extinguishing those that would disrupt society and its order as plain old adventure. As society and its order are important and help create a safe place for the Sky people and others like them. 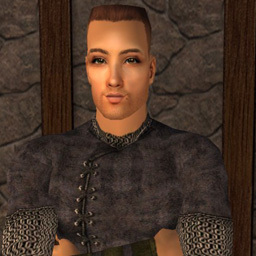